Battery testers ACK series are a powerful tool for a variety of tests of cells, batteries, supercapacitors, supercapacitor modules, and any other chemical current sources.

Due to this, battery testers ACK series can provide a wide variety of operating modes. For example, charging, discharging, and cycling charging and discharging the battery. Testing is performed according to a very flexible test program.

For example, the simplest, such as a single charge or a single discharge of the battery.

In addition, the instruments can perform cyclic tests, with multiple alternation of charge and discharge. This is relevant for resource and climatic tests of batteries.

Finally, battery testers ACK series can perform complex combination modes that simulate real-life battery conditions. For example, simulating the operation of an electric car battery when a car is moving in an urban driving cycle.

What do battery testers ACK measure?

During the tests, the ACK battery testers measure::

The tester returns measurement results of the parameters of the tested battery in the form of text result files. In addition, software of device automatic plotts of charts of the charge discharge of the tested battery. Finally, software of tester automatically builds graphs of degradation of battery parameters (which is convenient, for example, during cycle-life tests).

These modifications differ in the following characteristics:

The rest of the testers of various modifications are identical to each other.

The main parameters of the battery testers АCК

The battery is connected to the device using a four-wire circuit. Two power conductors as well as two low current conductors help to do this. This connection scheme allows you to monitor the voltage directly at the terminals of the tested battery.

The battery test program may contain:

At each step of the testing program, the ACK battery tester can provide the following operating modes:

You can configure the repeating of the cyclic part of the testing program over a million times. Therefore, battery testers ACK suitable for supercapacitors cycle-life tests.

ACK battery testers can provide multiple modes of operation with the battery under test. Their variety is large enough.

The step ends in the following cases:

maintains a given charge power on the battery. As the voltage rises, the charge current will decrease in order to keep the power value at a given level.

designed to keep the voltage on the battery at a given level after the main charge. The step, for example, helps to complete a two-stage charge in CC – CV mode. The end of the step occurs when the current drops to a predetermined value, as well as after a predetermined time.

The end of a step occurs when the voltage decreases to a specified value, or after a specified time.

designed to maintain a given battery discharge resistance. With a decrease in voltage, the current will also decrease so that the ratio of voltage and current is equal to the specified.

designed to hold the voltage at a given level after discharge. In this mode, the device simulates a powerful zener diode with a given stabilization voltage.

is a pause in the test. In rest mode, the device interrupts the current flow through the battery for a specified time.

smoothly changes the voltage on the battery. The voltage changes from a given start value U1 to a given end value U2 at a given rate.

You can use a combination of the two voltage scanning modes in the cyclic part of the test program. This makes it possible to investigate chemical current sources by the method of cyclic voltammetry in the mode of a powerful potentiostat galvanostat.

smoothly changes the current through the battery. The current changes from the set start current I1 to the set end current I2 at a given speed.

smoothly changes the power on the battery. The power changes from a given initial power P1 to a given final power P2 at a given speed.

The powers P1 and P2 can be either positive (charge power) or negative (discharge power). In addition, one of the power values can be zero.

smoothly changes the load resistance for the battery. The resistance changes from the initial value R1 to the final value R2 at a given speed.

The powers P1 and P2 can be either positive (charge power) or negative (discharge power).

A separate class of operating modes for testers of batteries is work according to the tables of current, power and resistance. In these modes, the battery tester operates according to previously prepared and selected tables. Tables must contain two columns. The first column is time. The second is the required values of current (power or resistance), which should be at this time.

The table modes simulate battery performance in a wide variety of applications. For example, simulating the operation of an electric car battery when the car is moving in an urban driving cycle, or in any other.

The table modes will be useful for simulating the operation of batteries, for example, in:

allows you to pass a current of a given value, direction and shape through the battery. The current supplies according to the specified current table.

allows you to supply the battery with the power of a given value, direction and shape. Power supplies according to the specified power table.

allows you to apply a load resistance of a given value and shape to the battery. Surely, resistance applys according to the specified resistance table.

on the battery terminals allows you to record changes in voltage over time. In logger mode, the power circuits of tester disconnects from the battery. This provides a high input impedance of the device and, therefore, a small effect on the battery under test.

The logger mode ends after the specified time.

Measurement of the equivalent series resistance of the battery

There are few ways for ESR measurement. The most accurate way is to interrupt the charge and discharge current with a specified period for a specified time.

This measurement mode allows you to plot the dependence of the ESR of the battery on the degree of its charge or discharge.

ESR measurement also occurs when changing pulses of current, power or resistance in the pulse modes.

In addition, ESR measurement takes place when changing steps in the testing program.

Measuring of capacitance of supercapacitors

Among other things, ACK testers are capable of measuring the electrical capacitance of supercapacitors, in Farads. The capacitance is measured at the constant current discharge step.

Based on the measurement results from the primary data files, there can be:

contain processed data. Each line of the summary results file describes summary data for a whole step, or for a whole cycle.

The lines of the summary measurement results file contain

The software can generate the following types of graphs based on the summary measurement results:

Battery testers work in connection with special software for user’s computer – Computer Interface Yp1. User should install this software on his computer.

The Yp1 software contains several pages. These pages help to:

allows you to set up the testing program.

On the “Tasks” page you should:

displays the graphs of the charge discharge of tested battery. Here you can see changing parameters of battery in various combinations, for example:

as well as special display modes, for example:

allows you to observe the formation of files of measurement results.

displays graphs of changes in battery characteristics depending on the following parameters:

The page allows you to visually observe the change in the characteristics of the battery during cycle-life tests, as well as during climatic tests.

is intended for setting up a connection to a battery tester or to several testers in their parallel operation.

provides detailed information on the operation of the ACK battery tester. In addition, information is provided on various emergency events that may occur during the tests.

Among other things, the Yp1 software allows you to open and view results files obtained in the past. After opening the files, the software automatic plots of the charge discharge charts, as well as degradation charts. Viewing historical files is possible, including in the Off-line mode, without connecting to the device.

The ACK battery testers have built-in memory. The memory halps to save the measurement results in case the connection with the computer becomes temporarily unavailable.

When the connection is restored, the tester transfers all the accumulated data to the computer. Then the Yp1 software saves the data to the files of the measurement results.

As a result, the built-in memory enables the battery tester to operate autonomously for some time after starting the test. This allows you to turn off your computer at night, as well as on weekends or holidays.

To order ACK battery testers, call us by phone

or send a request to the email address Yarstst@gmail.com

We supply battery testers under a supply contract.

The cost, as well as the delivery time, depends on the required number of devices. 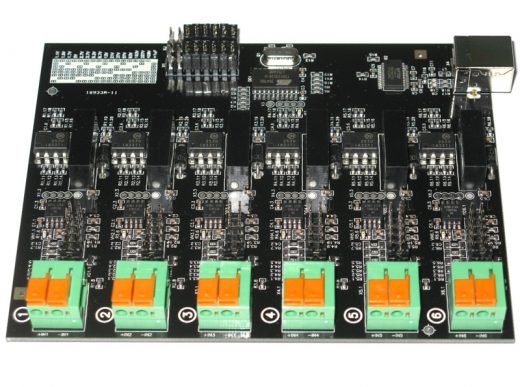 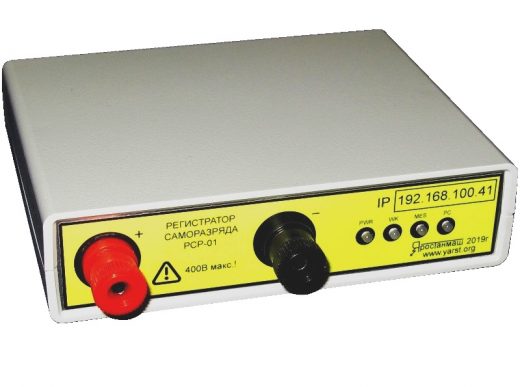 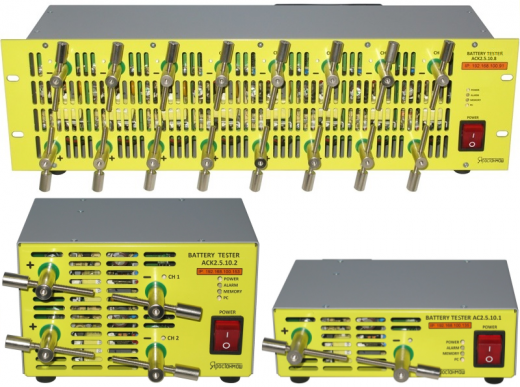